It has been 28 days since Deb Jung’s election was contested by the filing of an opponent on December 15, 2021, and six days (January 4) since your Office was formally notified of that fact by the State Board of Elections. It has been 3 days since the you told the Howard County Citizens’ Election Fund (CEF) Commission that you would take under advisement its unanimous recommendation to release all approved matching funds to our campaign.

Your use of a drafting error to block distribution of matching funds under current law is unconscionable because it construes the County Code in a way which would invalidate the entire CEF program for this election cycle, since no candidate would be eligible to participate. This has real-world consequences for our campaign and the others, as well as for the reputation of the electoral systems of Howard County and the State of Maryland.

At the CEF Commission meeting on Monday, you heard firsthand from persons involved in the 2017 legislation that the intent of the August 3 amendment to the bill was to clarify when a non-contested election existed in a general election context. People care strongly about this issue.

I’m incredibly concerned because what happens here … is going to be seen as a testament as to whether these alternative systems can work, whether they are a viable way to run elections that free us away from investments from big money in our systems.  For Howard County, which is widely seen, and I say this as a resident, that gets things right and does things well and is a model for the rest of the state, for us to let our program completely disintegrate and fail on a technicality, is going to send a message to the rest of the state that these are not programs to invest in or run in or believe in and that sends a message that ripples out….

It’s incredibly frustrating to think that the technicality of a date that was intended to refer to the general election is going to be used to destroy this program because that’s what it will do. Candidates will not only not run, they won’t run in the future…. This is a conversation that is far bigger than any one campaign. This is about the state of elections in this country….”

You also heard that applying August 3 as a contested election determination makes no sense since candidates ordinarily don’t file their certificates of candidacy that far in advance (over 6 months) from the State candidate filing deadline. There were no contested primary races in Howard County on August 3, 2021. Moreover, during the gap between August 3 and the filing date of February 22, 2022, when the election season heats up, this literal reading of law would restrict candidates from using the CEF or relegate them to the fringe of the election process. That is an absurd consequence from an electoral process perspective and undermines the goals clearly expressed to guide the establishment of the CEF system. Dr. Ball voted for the CEF bill in 2017. Ask him if it was ever discussed that there would be a more than six-month restriction to file to participate in the CEF between August 3 and the State filing deadline. There is nothing in the legislative record to support a conclusion that the County Council intended such an irrational public financing system in Howard County.

Clearly, the August 3 deadline was a technical error intended to clarify the date when an election would be in considered contested in the general election. That date comports with the first business day after the filing deadline for non-major party candidates in a general election context. It has no relevance in a major party primary election. If the August 3 date is construed to apply to a general election only, the law totally works from a statutory construction perspective. Nothing prevents you from freeing the matching funds now and then making the appropriate corrective legislative fixes at the earliest possible time.

We, and the other CEF campaigns, relied on the representations of the County Finance Department, the CEF Commission, and the State Board of Elections and followed all the rules. Each agency said the State filing deadline was the key deadline and never mentioned the August 3 date. Your decision, unless reversed, is a fundamentally unfair “gotcha” political ploy that violates common notions of fair play. It represents an unprecedented changing of the rules mid-way in an election in Maryland and sends a message that our election machinery is being manipulated for political purposes when we instead need to restore voter confidence. You are taking a technicality and turning it into a partisan sword. Making the distribution now harms no one. Fix this immediately or you risk harming the County’s reputation for good government and civility. Reputation is important for everyone. You don’t want this on your conscience.

If you do not respond by noon on January 18, the date of the hearing on CB 6-22, we will assume that your decision is no and must act accordingly.

Here is the PDF version of the letter: Letter to Finance Director – Final

I am not sure what “If you do not respond by noon on January 18, the date of the hearing on CB 6-22, we will assume that your decision is no and must act accordingly” means but that does not sound great.

If you have some free time this morning (8:30am): I will talk with members from Common Cause MD (Joanne Antoine; Executive Director) and Maryland Public Interest Research Group (Emily Warfield Scarr; State Director) about the current problems with the Howard County Citizens’ Election Fund. 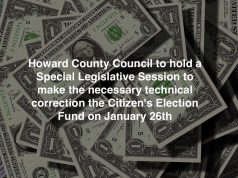