Note: See update at the bottom of this article

My public comment letter to the BOE ahead of tomorrow’s meeting:

“Members of the Board,

As you prepare to vote to approve the “Political Neutrality” policy tomorrow evening, I hope you understand the message you send to the teachers of our county with your vote. At the last meeting, you were clearly advised that the proposed policy would lead to legal challenges. In theory, it is also redundant with existing policy, but in spirit it is much more nefarious.

As a candidate for election to the Board of Education, I have been spending the past few months meeting with teachers and school staff to hear about their experiences and perspectives. Despite the MANY challenges they are currently facing, at the core CCPS teachers just want to be trusted, listened to, and treated with respect. They are professionals who have trained to prepare students to become community citizens, change-makers, and contributors to a democratic society. The political neutrality policy is an assault to their expertise and judgment, and a threat to their personal well-being, as anyone will be welcome to report teachers for violating a “politically neutral stance” in the classroom by simply encouraging the free exchange of ideas in an educational conversation that feels a bit uncomfortable or is in tension with someone’s personal beliefs.

Schools should not prohibit thoughtful discussion to avoid controversy or viewpoints that may be unpopular, and teachers certainly should not be penalized for doing what they do so well – engaging students in critical thinking. We should be welcoming such conversations in the classroom! As teacher education professor Alyssa Hadley Dunn argues, strict adherence to “neutrality” – avoiding political or controversial topics – is a tactic that can actually marginalize many students. Taking a neutral stance reinforces the status quo and silences underrepresented voices and opinions.

Monitoring and reporting teachers who are perceived to deviate from the official curriculum is disturbing, and is a slap in the face to teachers who are pouring their time, talent, and treasure into thankless jobs. Endorsing this policy will only serve to increase discontent and staff shortages – two issues I would hope would be of much more concern to this Board.

Candidate for CCPS Board of Education

Dang…I think some feedback is required.

Let’s be clear…parents (and grandparents…like me) do not hate teachers. The reality is we love most of them. Now do we all love all what the Teachers Union pushes down…no. That is also a reality. We do not hate the Union…but some things we just do not agree on. The fact that some (or even many) parents do not align with the Union should not be spun in a way that many do not support teachers. Yet watch what is said online and in public…it is just wrong.

The “Political Neutrality” policy is something most parents around here seem to want (at least that is my interpretation at this point)…so we will see what happens tomorrow…but know it will be an issue going forward.

I do not know Amanda well…she may be the greatest person ever. I just do not know. I would love to get to know her better and better inform my followers. I know this …we might be on opposite ends on this issue…and that is fine. Most political people I disagree with on some issues…this one was notable enough for the Blog tonight.

There are moments I regret not running for BOE in Howard County in District 3 in 2020…especially when I see that the currently elected member not even show up to meetings in person at all. But I left that county and am here now (and so happy to be here)…and comments or posts like this make me concerned about our school system for my grandkids and maybe…just maybe…act on that in the future. Just maybe.

Appreciate you taking interest in my letter, Scott, and the opportunity to respond. However I’m confused about how you get from it that parents hate teachers? I do think the addition of language about “alignment with the approved curriculum” is misguided, as it is not possible for the formal curriculum to include all daily topics and conversations that occur in a classroom, and therefore alignment with a class activity may be open to interpretation. The most concerning part, however, was the proposed “formal concern form,” and the associated conversation by the Board about examples of infractions that would warrant reporting. These included teachers asking students for their pronouns and other inclusive practices. Ultimately, as I wrote in the letter, there is a policy in place that works, and in speaking with both teachers and administrators, there were no concerns or needs for additional measures related to political activity/neutrality. In fact, most felt that more flexibility and protections were needed for teachers wishing to show support for diverse perspectives (such as wearing an LGBTQIA+ pride mask), as they have been asked to refrain from doing so. The new policy (and the discussion/vote by the BOE about it) is most harmful in that it signals mistrust of teachers and encourages a culture of surveillance in the schools. As you heard last night, even several stalwart members of the Board felt that the tracking form was a step too far, and therefore the final decision was to accept the politically neutral policy, but to decouple the form from the policy, so that it could be used by parents if general concerns arise (including issues related to politics in the classroom). I think this was a wise decision, and showed that the Board heard some of the public comments. In particular, they mentioned that they did not want to send a message that teachers are unwelcome in CCPS, and acknowledged that the tracking form may be perceived in this way. 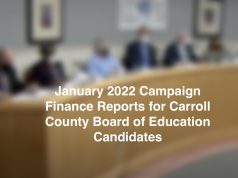