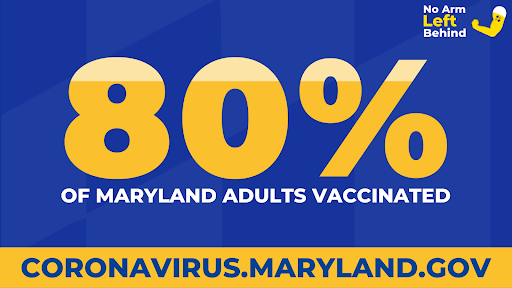 Governor Larry Hogan today announced that, according to official CDC data, the State of Maryland has achieved the milestone of vaccinating 80% of adults with at least one dose of a COVID-19 vaccine.

“After vaccinating 70 percent of Maryland adults by Memorial Day—months ahead of the goal set by President Biden—we have achieved another major milestone by vaccinating 80 percent of all adults by Labor Day,” Governor Hogan said. “As one of the most vaccinated states, our health metrics are among the lowest in America, and we are much better prepared to withstand the significant summer surge of the Delta variant, which many other states with lower vaccination rates are now experiencing. The vaccines are very safe, they are very effective, they are completely free, and they are widely available nearly everywhere.”

At a press conference earlier this week, Governor Hogan called on the federal government to take a number of steps to protect Americans and expand the vaccination campaign:

“Governors across the country have become increasingly frustrated with the confusing messaging and conflicting guidance from the White House and federal government agencies regarding booster shots for the wider population,” said Governor Hogan. “This is one of a number of areas where we are pressing the Biden administration for action.”