Reported by the Office of the State’s Attorney for Howard County on July 19th:

Justin Lee Buchanan, age 35, of Baltimore, was found guilty by a Howard County jury today of attempted second-degree murder, first-degree assault, weapons violations and serious traffic offenses after firing shots at Baltimore County Police officers from inside his vehicle following a pursuit that ended in Elkridge in May of 2020.

On May 21, 2020, at approximately 1:50pm, Baltimore County Police officers were conducting surveillance in Landsdowne, MD, to apprehend Benjamin Lemon. Lemon had an open arrest warrant and was suspected of being involved in a Baltimore County shooting on May 19th. Lemon hopped in the rear passenger seat of a black 2014 Acura RX that was being driven by Buchanan. When officers attempted to initiate a traffic stop, Buchanan, the driver of the Acura sped away from police and a pursuit began.

The pursuit that started in Baltimore County headed south into Howard County. At approximately 2:27pm, multiple shots were fired from inside the suspects’ vehicle towards Baltimore County Police Officers. Once officers realized they were being fired upon, they returned fire and sought cover. The incident ended just before 2:30pm in the 5700 block of Furnace Ave in Elkridge.

Buchanan and the front seat passenger were injured as a result of their gunshot wounds and taken to Shock Trauma. Lemon was not injured and was taken into custody on an open Baltimore County warrant. Investigators later found a handgun at the scene and multiple spent cartridges inside the Acura. No officers were seriously injured during the incident.

Evidence later showed Buchanan’s DNA on the firearm used in the shooting.

“Mr. Buchanan’s reckless and dangerous behavior in fleeing from police and then, later, firing shots at law enforcement not only endangered the lives of responding officers, but also put the community, as a whole, at risk,” said State’s Attorney Rich Gibson. “Today’s verdict brings justice and a sense of relief to many; knowing the defendant is being held accountable for his actions and will no longer be a threat to our communities.”

Buchanan will be sentenced on October 8, 2021.
Senior Assistant State’s Attorney Michael A. McAllister prosecuted this case 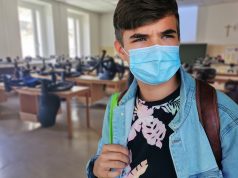