Howard County General Hospital: A Member of Johns Hopkins Medicine announces that Caitlin Toler from Reservoir High School and Drew Ross from Marriotts Ridge High School are the 2021 recipients of the Aronson/Willis Memorial Award. Each student was awarded a $2,000 scholarship and a certificate from the hospital’s professional staff.

Toler and Ross were chosen for maintaining the highest grade point average while participating in at least two varsity sports. Each year, one graduating male and one graduating female are chosen to receive the award.

Aronson, a supporter and coach of school athletics, died in 1986. Willis, who died in 2009, also was active in area sports in addition to holding positions at the hospital through the years, including chair of orthopedic surgery and member of the board of trustees.

No photo was available of the award recipients for this article. 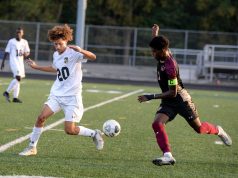