A federal criminal complaint has been filed charging Clayton Alexander McCoy, age 30, of Chesterland, Ohio, with transporting explosives with intent to injure and with with using, carrying, or possessing a destructive device during and in relation to a crime of violence, in connection with a bombing in Manchester, Maryland on October 30, 2020. The criminal complaint was filed on March 3, 2021 and unsealed today. McCoy will have an initial appearance in U.S. District Court in Cleveland, Ohio on March 12, 2021. McCoy will be transported to Maryland for an initial appearance in U.S. District Court in Baltimore at a later date.

According to the affidavit filed in support of the criminal complaint, on October 30, 2020, a victim sustained serious injuries and burns consistent with an explosion, after opening a package. Another resident of the home found the package, which was addressed to the victim, on the front porch of the home that morning at approximately 8:30 a.m., after the victim had left for work. The resident brought the package into the house and placed it in the kitchen to await the victim’s return. At approximately 5:30 p.m., the victim returned home and saw the cardboard box that was addressed to him. He opened the cardboard box and observed a smaller white box with a red ribbon inside. The victim took both boxes into his bedroom to open in private. According to the victim, as he opened the smaller white box, a small nail that appeared to be inserted into the white box was pulled outward. When he removed the nail, the victim heard a whistling or hissing sound followed by an explosion. The victim was struck in the front of his body by shrapnel and sustained injuries to his chest, legs, and front of body. He was transported to the hospital where he was treated for injuries caused by the shrapnel and explosion. The victim was released from the hospital on November 17, 2020 and is continuing with rehabilitation. Investigation revealed that the explosive device was likely a type of pipe bomb containing shrapnel.

The victim’s girlfriend advised law enforcement of a recent interaction with McCoy, with whom she had been friends for approximately seven years. As detailed in the affidavit, the victim, his girlfriend, and McCoy were all friends through their participation in Dagorhir, a live action role-playing battle game with full contact melee fighting and ranged combat as its primary focus. Sometime in early October 2020, McCoy told the victim’s girlfriend that he had feelings for her. She advised McCoy that she did not feel the same way and that she was in a relationship with the victim. She and McCoy agreed to remain friends.

Search warrants obtained by law enforcement found that in the very early morning of October 30, 2020, a device associated with McCoy and located at his residence allegedly searched for and obtained directions to the victim’s home address. McCoy’s cell phone then allegedly traveled from his home to the victim’s home, and a pickup truck, similar to a pickup truck registered to McCoy’s mother, was seen in front of the victim’s home and was depicted on home security video taken that day from a neighbor’s security camera. In addition, a review of McCoy’s online accounts revealed that a week before that the bombing, McCoy allegedly searched for the gas tank capacity of a 1994 Toyota pickup, the same make and year of the pickup truck registered to McCoy’s mother.

If convicted, McCoy faces a maximum sentence of 20 years in federal prison for transporting explosives with intent to injure and a mandatory minimum of 30 years and a maximum of life in federal prison for using, carrying, or possession of a destructive device during and in relation to a crime of violence. Actual sentences for federal crimes are typically less than the maximum penalties. A federal district court judge will determine any sentence after taking into account the U.S. Sentencing Guidelines and other statutory factors.

This case is part of Project Safe Neighborhoods (PSN), a program bringing together all levels of law enforcement and the communities they serve to reduce violent crime and make our neighborhoods safer for everyone. Project Safe Neighborhoods (PSN) is the centerpiece of the Department of Justice’s violent crime reduction efforts. PSN is an evidence-based program proven to be effective at reducing violent crime. Through PSN, a broad spectrum of stakeholders work together to identify the most pressing violent crime problems in the community and develop comprehensive solutions to address them. As part of this strategy, PSN focuses enforcement efforts on the most violent offenders and partners with locally based prevention and reentry programs for lasting reductions in crime.

Acting United States Attorney Jonathan F. Lenzner commended the ATF, the Office of the Maryland State Fire Marshal, the Carroll County Sheriff’s Office, and the Carroll County State’s Attorney’s Office for their work in the investigation and thanked Acting United States Attorney for the Northern District of Ohio Bridget M. Brennan and her office, and the ATF Columbus Field Division for their assistance with the searches and arrest. Mr. Lenzner thanked Assistant U.S. Attorney Paul E. Budlow, who is prosecuting the case. 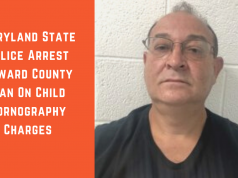 Northwest Middle School will be closed for all in-person learning for two days due to COVID-19: September 21st & September 22nd; Students will attend...