The National Weather Service has issued a Winter Weather Advisory for Carroll County in effect from February 15, 05:00 PM EST until February 16, 07:00 AM EST

Here are the details of the recent advisory:

* WHAT…Freezing rain. Additional ice accumulations of around one tenth of an inch.

* WHEN…From 5 PM this afternoon to 7 AM EST Tuesday.

* IMPACTS…Difficult travel conditions are possible. The hazardous conditions could impact the morning or evening commute.

Slow down and use caution while traveling. Prepare for possible
power outages.

When venturing outside, watch your first few steps taken on
steps, sidewalks, and driveways, which could be icy and slippery,
increasing your risk of a fall and injury.

Here is what NWS Washington-Baltimore recently posted on social media:

Washington’s Birthday – Rain likely, possibly mixed with freezing rain, becoming all rain after 5pm. Cloudy, with a high near 33. Northeast wind around 6 mph. Chance of precipitation is 60%. Little or no ice accumulation expected.

Tonight – Freezing rain before 1am, then rain. Patchy fog before 10pm, then patchy fog after midnight. Patchy freezing fog between 10pm and midnight. Low around 32. East wind 6 to 14 mph becoming southwest after midnight. Chance of precipitation is 100%. New ice accumulation of around a 0.1 of an inch possible.

Tuesday – Rain likely, mainly before 9am. Patchy fog before 9am. Otherwise, mostly cloudy, then gradually becoming sunny, with a high near 44. Breezy, with a light southwest wind becoming west 15 to 20 mph in the morning. Winds could gust as high as 28 mph. Chance of precipitation is 60%. New precipitation amounts of less than a tenth of an inch possible. 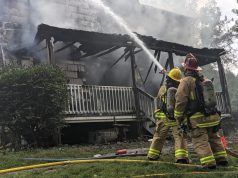