CB7 is a Zoning Regulation Amendment (“ZRA”) requested by Developer Annapolis Junction Town Center, LLC for its ongoing project next to the Savage MARC Station. What’s proposed in that legislation would nearly double the allowable building height on land there—and anywhere else in the County “within 750 feet from a MARC Station platform,” meaning also at the Dorsey and/or Laurel MARC Stations—from 100 feet to 180. Developer assured Council that permitting the near doubling in height would result in no additional density on site given already-existing setback minimums and square footage maximums in the zoning regulations for property zoned Transit Oriented Development, or “TOD.”

As a matter of policy, highest-density mixed-use in walking distance of regional mass transit is maybe as good as it gets—assuming the County had the schools and roads and other public services necessary to actually receive highest density, which as a general matter we don’t. Also good policy would be actually building the Code-mandated minimum of affordable housing on site, which at least to date this Developer has declined to do. (That housing requirement got shipped off to you, #Elkridge.)

#HoCoMd’s Council votes on CB7—and another ZRA bill even more unlikeable, more about that next—tomorrow, at our snow-delayed-from-Monday-night hearing, beginning at 1pm.

You might please consider sending us a note between now and then asking us to vote no on CB7 and CB8: councilmail@howardcounty.gov.

You can watch the legislative session live or later on, beginning at 1pm, tomorrow Wednesday, February 3: https://cc.howardcountymd.gov/Online-Tools/Watch-Us.

And the complete bill file for CB7-2021 should be posted, here: https://apps.howardcountymd.gov/olis/LegislationDetail.aspx?LegislationID=12651

AN ACT amending the Howard County Zoning Regulations to allow structures within 750 feet of a MARC station platform to exceed 100 feet in height up to a maximum of 180 feet in height under certain circumstances; and generally relating to the Transit Oriented Development (TOD) Zoning District.

The Chair at the request of Annapolis Junction Town Center, LLC

Here is the agenda for the Howard County Council meeting on February 3rd at 1:00pm:  https://cc.howardcountymd.gov/Portals/0/ALS02012021%20rev.pdf 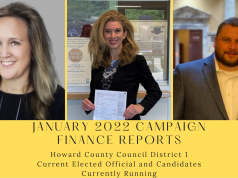