Howard County police are investigating a fatal collision that occurred on Route 108 in Ellicott City this afternoon.

Police were called to Route 108 at Manorstone Lane at 4:12 p.m. for a report of a two-vehicle collision. A 2001 Chevrolet Impala had been traveling eastbound on Route 108 when it crossed the center line and was struck by a 2016 Lexus SUV traveling westbound.

The driver and sole-occupant of the Impala, Marc Ryan El-Sayed, 17, of Clarksville, was pronounced dead at the scene.

The driver and sole-occupant of the SUV, Susie Lee Yang, 48, of Highland, was transported to the University of Maryland Shock Trauma Center with non-life-threatening injuries.

The cause of the collision remains under investigation.

Route 108 was closed in both directions between Manorstone Lane and Bragdon Wood for approximately three hours. 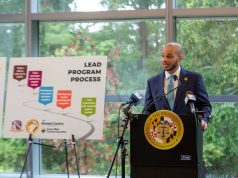