Members of the Maryland General Assembly introduced a number of bills today aimed at combating the increasing risks of climate change and sea level rise that threaten Maryland communities.

Here is the image that goes along with that post:

Here is the text from the press release on January 27th:

Members of the Maryland General Assembly introduced a number of bills on Monday aimed at combating the increasing risks of climate change and sea level rise that threaten Maryland communities.

Senator Katie Fry Hester said: “Maryland is facing up to $19 billion worth of damage due to sea level rise and flooding by 2050. It’s really easy to look at numbers that big and far off and feel removed from the consequences of these events, but there are communities and families behind those numbers. People whose businesses and homes have been irrevocably changed, not to mention future generations who will have to face these challenges, most likely at a larger scale than we do now. We have a responsibility to address this challenge directly and prepare more aggressively to mitigate these risks now. That’s why my colleagues and I are fighting to provide communities with tools like FEMA’s new Building Resilient Infrastructure & Communities program or a chief resilience officer – to build a more resilient Maryland.”

Senator Elfreth pointed to the increased flooding in her own district as a need to address this issue in the 2020 session: “Annapolis experienced 63 days of nuisance flooding in 2017 alone which shut down the City Dock, businesses, and threatened our public safety and historic communities. But this isn’t just an Annapolis problem. That’s why our Resilience Authority legislation provides a broad framework for different communities – from Ellicott City to Easton to Baltimore – to establish, fund, partner, and implement the Resilience Authority that best fits the needs of that community.”

Delegate Brooke Lierman, House sponsor of the Environmental Accountability and Transparency Act that seeks to increase citizen participation in environmental law enforcement by adding an ombudsman officer in the Office of the Attorney General, said, “A rising Chesapeake Bay, 100-year floods every few years, and rapidly rising temperatures in Baltimore are all alarms that it’s time for policymakers to heed: we have to take action now to ensure Maryland communities can prevent and mitigate the impact of climate change in our state. These policy proposals are integral to equipping our state moving forward.”

Delegate Watson who represents Ellicott City said, “For every dollar we spend on mitigation, we save $6 in damages from flooding. This underscores that we must move climate resiliency to the front burner. It’s a smart investment on the part of the state, and we have to move faster.”

Senator Hester’s MD PACE-R Financing Act will extend the PACE (Property Assessed Clean Energy) financing mechanism to owners who wish to increase the resiliency of both residential and commercial property. PACE loans are currently used to finance energy efficiency improvements: local governments and lenders cooperate on loans secured by the property tax obligation – which does not appear on the owner’s balance sheet. This powerful financing tool will encourage individuals, organizations, and government agencies at the state and local levels to include resiliency in their retrofits and new construction.

I am hoping to catch up with the two local legislators (State Senator Katie Fry Hester and State Delegate Courtney Watson) at some point to learn more about the five bills noted in this article. I am curious of the real impact and costs this legislation will have (always things I look at when evaluating proposed legislation).

State Effect: Overall finances for the BRF Wastewater Account are not affected; the bill merely changes the priority ranking for certain projects and expands the authorized uses of the account. MDE can promulgate implementing regulations with existing budgeted resources. Revenues are not affected.

Local Effect: Local grant revenues and expenditures are likely affected by the change in priority ranking and could also be affected to the extent that BRF funding is provided for volume or quality control stormwater measures instead of other authorized uses. Any such impact cannot be reliably estimated at this time.

Small Business Effect: Minimal overall, but potential meaningful impact on some small businesses depending on the projects that receive funding under the bill.

Article Update: SB47 noted above can be found at HB539: Local Governments – Resilience Authorities – Authorization and SB457: Local Governments – Resilience Authorities – Authorization. There is no fiscal summary of this legislation yet. Thanks to Delegate Watson for sending me the updated house bill number this morning and to Senator Senator Sarah Elfreth for sending me the correct senate bill number. 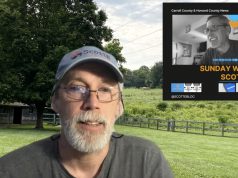