To date, Howard County Government has acquired nine of the 10 buildings it planned to purchase on lower Main Street. Six of these buildings will now have portions preserved. The next step is partial removal of the sections of the buildings over the stream channel. To complete this and subsequent renovation of these buildings, the county needs to undergo a federal Section 106 process to assess the historical impacts.

“We’re excited to see The Phoenix stay in Historic Ellicott City and merge with another Main Street business, The Ellicott Mills Brewing Company,” said Howard County Executive Calvin Ball. “The resilience of Mark, Timmy, and their staff emphasizes that there is something special about this community. Moving forward, we will continue to work with all the residents and business owners through our Ellicott City Safe and Sound Plan as we make sure Ellicott City is protected and preserved.

Ellicott City has seen great progress in 2019. Nearly 30 business opened or reopened in the historic town. The Safe and Sound plan is heavily focused on the economic vitality of Main Street’s businesses, providing relief for business owners and residents impacted by floods, and creating a more community-driven process for how decisions are made regarding Ellicott City.”

Ball announced the Ellicott City Safe and Sound Plan on December 28, 2018. The final plan selected in May will reduce flood waters on Main Street to less than a foot in a 100-year storm and approximately three feet in a storm the scale of the July 2016 flood. Safe and Sound Plan developments as reported by the media can be found here.

Additional efforts on flood mitigation and public safety improvements included in the plan have been made this year:

More information about the Safe and Sound plan can be found at https://www.ecsafeandsound.org/.

It is good to see progress on Main Street in Ellicott City.

Interesting that after the news yesterday came out “March 31st will be the last day of operation of The Phoenix Emporium at 8049 Main Street” that the statement above notes “Howard County’s negotiation to acquire The Phoenix Emporium building is still being finalized…”. I am hoping that there is not some sort of glitch that happens during those negotiations. 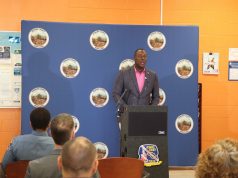