Westminster recently became the third municipality in Maryland to pass a plastic bag ban (along with Chestertown and Takoma Park). The Westminster ban will go into effect in the summer of 2020.

Noted in an article from the Carroll County Times (Westminster passes plastic bag ban — the third in Maryland — and city budget) Westminster carved out certain exemptions to the ban that include:

It also added exemptions for plastic bags used in “wrapping plant material (such as tobacco) that might be subject to spoilage, bags used by restaurants for take-out and delivery of foods, and the distribution of bags by small businesses with fewer than 25 employees at all of their establishments, unless the business is a franchise,” according to a memo included in the meeting packet.

Here in Howard County many watch closely to see what Governor Hogan does with HB 1166 (Authority to Impose Fees for Use of Disposable Bags Ho. Co. 04-19)…better known as the “Howard County Bag Tax”. If he does sign this bill (or allow it to be passed without signing it) the Howard County Council could (and probably would) take up a bill that would tax on residents for accepting plastic bags at checkout from stores.

The Howard County Council could take the bold step of being the first county in Maryland to pass a plastic bag ban (something they would have my full support on going forward). A ban similar to that which Westminster just passed…even with the exemptions…would have a far greater impact on reducing plastic bags in our area than a plastic bag tax.

Howard County Executive Calvin Ball has recently stated the following in regards to going plastic bag free with recycling: “Making Howard County the most environmentally friendly jurisdiction in the state and region is a goal of my administration…”…if that is the case…would a plastic bag ban not make a greater impact than a tax on the residents at checkout?

Councilwoman Christiana Mercer Rigby (District 3) recently posted the following message on Facebook in regards to the plastic bag ban with recycling “So glad to see that Howard County Government is no longer accepting plastic bags as past of their curbside recycling collection! When it comes to reducing single-use plastics & plastic bags in Howard County, every step counts! ♻️♻️♻️”

I have posted numerous articles about my opposition to the plastic bag tax and provided data from MoCo and Washington DC that I believe supports my opposition.

Let us look at the reason not to ban bags but to tax bags…MONEY!!! The county does not get any revenue by banning bags and they do get revenue if they can tax us on those bags. That revenue would be limited to “environmental purposes” which is so broad (in my opinion) that it can and may be used in a number of areas…but the bottom line is that a tax on bags is about money…a ban on bags is about really making a difference in the number of plastic bags in our area (at least to me).

Now nothing can happen until HB 1166 is resolved…that seems like it will happen by the end of the month one way or another (my hope is the Governor Hogan vetoes it…but time will tell).

If this bill becomes law…will the County Council go the way of taking bold actions on plastic bags to help make Howard County the most environmentally friendly jurisdiction in the state and region or opt for the option of revenue?

We will all see. 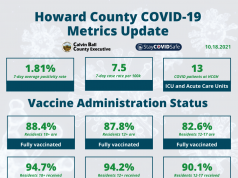