There has been a lot of talk about the potential of Governor Larry Hogan running for President in 2020. Now I believe most people think he will not…but then I saw his bracket choices for the NCAA tournament…and it made me wonder. Here is what he published on Facebook:

So I understand picking Maryland to win it all…he is the Governor of this state…that is somewhat expected. The shocker was who he has in the championship game against Maryland…10 seed Iowa. Now there are VERY few people out there picking Iowa to make a run that deep…but if you are planning on running for President…this is a smart choice before going out there asking for their votes in a primary election.

Something to think about today. 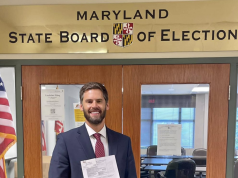