In on of my favorite announcements recently…County Executive Ball will Illuminate Howard County’s George Howard Building with Purple Lighting in Hopes of a Successful Ravens Playoff Run. Here is the information from the press release:

ELLICOTT CITY – Howard County Executive Calvin Ball directed the Department of Public Works to illuminate the George Howard Building in Ellicott City with purple lighting to honor the Baltimore Ravens AFC North Division Championship and in hopes of a successful playoff run in the weeks ahead.

“Like our neighbors across the Baltimore region, Howard County is raving about the Ravens today and excited about the weeks ahead as the team begins the journey for their third Super Bowl championship,” said County Executive Ball. “Earlier this year, the Baltimore Ravens were here to help us with a $10,000 donation to assist our Ellicott City recovery efforts. We appreciated their support, and, in turn, we want them to know that their loudest and most passionate fans are here in Howard County. I am proud to illuminate the George Howard Building in purple and am confident that it will help bring good luck to the Ravens during their playoff run.”

The George Howard Building will be lit purple every evening beginning at dusk until the Ravens playoff run comes to an end. County Executive Ball will also be encouraging Howard County employees to participate in “Purple Fridays” by wearing Ravens apparel during the playoffs.

The county building lit up purple in the evenings…“Purple Fridays” during the playoffs…I could not support this more…this is a great way to show support for an organization that supported Ellicott City earlier this year.

The Ravens play on Sunday at home at 1:05pm against the San Diego Chargers. We beat them earlier this season…and we need this one to continue in the playoffs. GO RAVENS!!!

Hopefully we get some great photos of the building lit up in the evenings and staff wearing their purple gear on Friday on social media (hint, hint –  to the person running the social media accounts for Howard County Government). 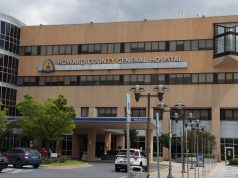