The Kittleman campaign released a new video yesterday featuring Lisa Markovitz (the President of The People’s Voice) talking about why their organization chose to endorse Allan Kittleman on their Ethics Ballot. Here is some of the text on the Kittleman website:

Ellicott City, MD – The People’s Voice, a local organization that helps inform residents of local government issues that affect their quality of life, is pushing to help Howard County residents understand the records of the candidates for County Executive.

In a video released today, the President of The People’s Voice, Lisa Markovitz, explained the organization’s vote analysis of Councilmember Calvin Ball after he decided to not answer the organization’s Ethics Ballot questionnaire. Before endorsing either candidate for County Executive, the Board of Directors, all Democrats, took it upon themselves to analyze Ball’s voting record.

“We looked at his 12-year voting record. We saw pro-development, pro-development. So much density, so much population increase in such a short amount of time that it overwhelmed the public resources, it crowded our schools. Over 12 years constantly having this growth, it’s created public safety concerns, and in such a huge way that we now have flooding and environmental concerns added to our woes,” said Markovitz.

Here is the video:

We are two days from the start of early voting. Know when and where to vote in Howard County: https://scotteblog.com/2018/09/25/general-election-early-voting-howard-county-maryland-october-25-through-nov-01/ 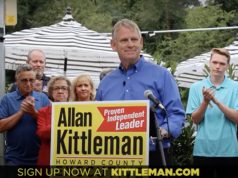 Fair Maps Maryland Board of Directors Jim Brochin and Allan Kittleman join Fox 45 Morning News to discuss why gerrymandering is so bad for...